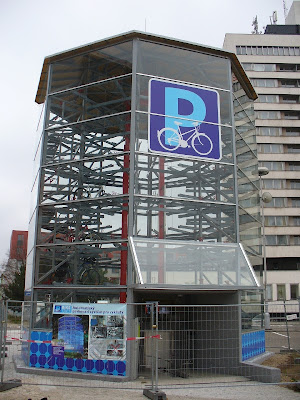 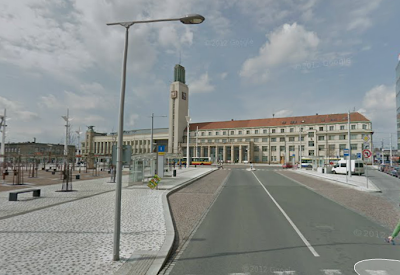 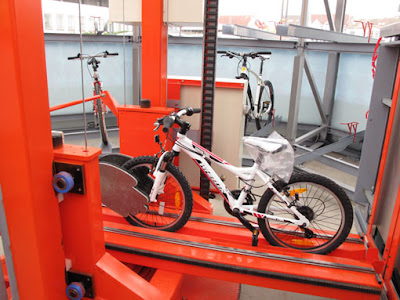 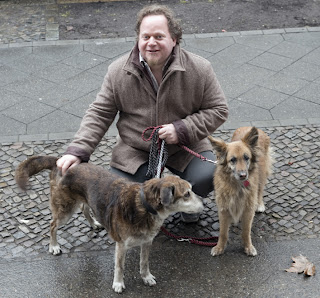 Facsinating new from my born-town. I thougt that every bikers dayed few years ago in that city . . . Zde Nda

Level of service comment is important where several cyclists will arrive with a very precise time to get from street to train, and for each space back in the queue you wait for the next person to park the bike. Before long someone gives up and locks the bike to the fence in order not to miss their train.

Same detail as several people get off the train and all want immediate benefit (the key way that cycling works to give a faster journey time) and rush to retrieve bikes. A decade ago the Dutch were using Carousels, but these also proved unsuitable for rail stations.

Dave H, yes - in addition to your comments that I linked to and agree with - I had this concern, BUT how is it dealt with in current operations in Asia? Cultures vary but a missed train is a missed train.

What are these "Carousels"?

Well, the thought of having a robotic bike parking tower is truly amazing! This can perhaps contribute to cycling success! Share more of your thoughts. Thanks.

This is fantastic! i am amazed to see that! keep sharing that robotic stuff!

Amazing piece of Writing. "Honesty about economic capabilities is a virtue; lowering of standards is not." liked it. Thanks for sharing.

found this blog really impressive. parking for cycles prove to be beneficial because still many people use cycles for conveyance.Manchester Parking