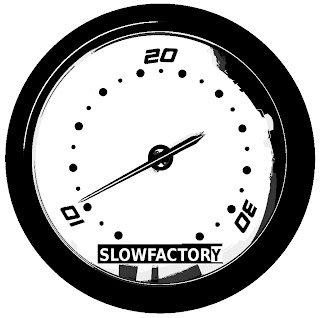 The transition from Green Idea Factory to Slow Factory has taken some time...  in part because my main activities and even the core from which they originate always seems to be in flux. So, coming up with a new name/moniker/brand is difficult.

Case in point is the new logo, above - and yes, the transition was also slowed because I did not have an alternative to the Green Idea Factory logo.

I am preserving "Factory", which has in part a musical origin: Factory Records, home of Joy Division and New Order, and that is based in part on Andy Warhol's Factory, in a way the first home of the Velvet Underground. And in relation to this what's really cool or slightly humorous - just found this out - is that my paternal grandmother is from the closest town just down the hill from the village where the Warholas lived in Eastern Slovakia. 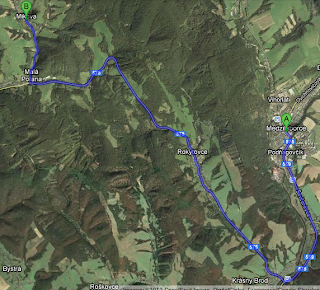 The first version of the new Slow Factory logo was the same except it had all the numbers up to 100 (This was never a real speedometer... just something stylized I found on the web and am using legally). It is ambiguous in regards to miles or kilometres. 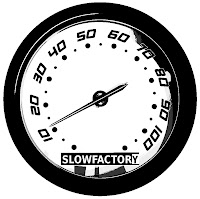 The needle was in the same place, too, but I did not consider this to be an infographic or any kind of instruction, or to be absolutely literal about what informs my work.

But the needle is at about what could be 12mph, which is a nice pace for city cycling.

I sent this first version to my informal advisory board (located in Bogota, Brussels and San Francisco) and they suggested three similar things:
1 - "You should put a limit near the 20-30 mark and the rest have it somehow erased or blurred, non?" (from Bogota, where they use km/h*);
2 - "Confused: why isn't the top speed a low number?" (San Francisco);
3 - "Meaning, you can go up to 100 when you want to?" (Brussels).

*I started with the metric system when I lived in Prague, where "km/h" means "kilometrů za hodinu" (kilometres per hour).

I explained my intentions in general but also specifically:

"Mein Gott! Everyone wants this to be an info graphic! It's just a logo. Lots of good things go faster than 12mph!

There is a simplistic obsession with 20mph/30km/h speed limits, also in Germany. On neighbourhood streets it is still too fast. They are not respected here in many places, both from the design and user angles. So I don't want the logo to just be about that."

.... and also to at least double 100(km/h) as 200 is the normal top speed of trains inside Switzerland. Going above this speed might seem logical for long distances - or be competitive with flying - but all it does is induce more mobility. It also requires much more expensive trains and infrastructure.

The real speed solution which is reasonable for the majority of people is... elusive. But also in the city what's most important is not having to slow down.  Having to then speed up increase noise and tailpipe emissions (motorized vehicles) or exertion (cycling). Walking is all about stopping and starting but it's nice to not have to stop at all (in much of Manhattan above Houston you can easily figure out how long it takes to get somewhere if you know your walking speed, because the grid in consistent).

So... maybe I want a logo - or infographic - which promotes the idea of traffic signals creating a kind of universal green wave on arterial streets, where pedestrians walk at 4mph and cyclists at three times that pace (12mph), taxis and carshare at 24mph and trams (or buses) somehow never have to stop at crossroads (only to pick up and drop off people)...

But - again - perhaps I don't have to be so literal and the second version of the new logo at the top already says that, more or less, in both km/h and mph.
Posted by Slow Factory at 5:27 AM 1 comment:

Leadership teams representing the Alliance for Biking & Walking, Bikes Belong, and the League of American Bicyclists agreed in principle on February 14, 2012, to support the unification of all three organizations to more effectively advance bicycling in the United States.

The consensus goal is to speed progress in creating a bicycle-friendly America, where bicycling is a viable transportation- and recreation choice for everyone and more people bike more often. This proposed unification would combine the significant resources of the three groups into one effective, powerful organization with a clear, integrated structure and a single voice..." 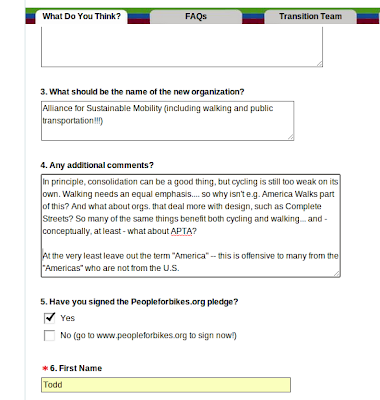 To see/take the full survey above, and the full introduction, see this link.

Posted by Slow Factory at 3:19 AM No comments: