For celebrations on a "bike theme" or not, certain special events etc. the MonkeyLectric Bike Wheel Light is lovely and wonderful, but it represents an extreme version of what I call "Hyper-illumination" creating both acute (at the moment of use) and chronic (cultural) danger for other vulnerable road users (VRU's, both pedestrians and cyclists), even those - only in the case of cyclists, of course - who are legally illuminated.

Less extreme Hyper-illumination includes reflective vests (which should only be worn by emergency or construction workers or related), reflective jackets, an excessive number of normal lights or reflectors, projections of bike paths around cyclists, or even "bright clothing at night" which many authorities and organizations recommend, also for pedestrians.

Fundamentalist hyper-illumination is exemplified by having the stoker on a tandem carry a torch or flare gun, or getting the air force or army to clear your path with napalm or phosphorous.

Acute Hyper-illumination means visually-obscuring other VRU's in immediate proximity, in other words making the eyes of drivers of motor vehicles adjust to the brightest thing, which means they can't see the darker stuff (and pedestrians can wear all the black they want).

Chronic Hyper-illumination is obscuring over time and in relation to place, i.e. it relates to learned behaviour. This means that when a driver becomes accustomed to a lot of VRU's being hyper-illuminated, they will not look for normally-illuminated VRU's elsewhere.

Something both Acute and Chronic relates more to cyclist-pedestrian interactions: A cyclist with no lights and only some passive hyper-illumination device such as a reflective vest may think that they are visible to pedestrians, but they are generally not more than normally because their vest is designed with car headlights in mind.

If you agree with me on this take on things I hope you also agree that its use for commercial advertising purposes should be illegal, or least very expensive. I would not go as far to say they should be illegal for non-commercial use at any time, but this is only because bikes should just be as close as possible to wheels attached to your feet, with things like "rider's licenses" never necessary. There are slightly less extreme hyper-illumination devices than the MonkeyLectric, such as The Down Low Glow (and I really like other Fossil Fool inventions) which to its credit seems to intentionally exclude the "unique advertising opportunity" thing. This website mentions "...cyclists feel safer..." and subjective safety is important as long as it is not at least out of balance with objective safety. It would be good to know if The Down Low actually makes things safer compared with bikes with typical, legal lighting.

These things could be useful for community police bikes, ambulance bikes or perhaps - if modified to be tamper-proof - as part of a theft-deterrent/triggered visible alarm feature. Even if they are fun (and obviously people have to purchase and install them) they distract from efforts for the promotion and implementation measures which make travel safer for ALL vulnerable road users: Slower speeds, less cars or obviously no cars, default liability for drivers and perhaps making cars softer (unless it causes risk compensation such as anti-lock brakes).

I would also be curious if cars tend to be driven closer to Hyper-illuminated VRU's.

Interestingly, the MonkeyLectric has dealers in many places, also in Europe. But not in the Netherlands, the safest place to ride in Europe (not perfect, to be very clear. No one should ever let the Dutch slack). Coincidence? Well, at this point the typical response is "... when our city is as safe as Amsterdam we will not need this stuff...". So the question is does having this stuff really move things forward towards an Amsterdam (or Dutch) level of safety?

I think the answer is no.

Updates:
* Another related attempt at a solution here, a backpack with turning and other signals. That the signals are not quite standardized might not be an issue, but having HUGE removable lighting certainly is! When it comes to normal city cycling, fixed front and rear (hub) generator lights, basic reflectors and proper turn signals with eye contact are really all that is necessary, right?)

* Continuing on in this Fall of Fear, this Autumn of Angst, see the continued rash of useless garbage cruising for a landfill in Treehugger.

* Bike Snob calls the video "Let's Get Visible" by Momentum magazine and partners the "worst PSA" he has ever seen. It features products from MonkeyLectric and Lazer helmets. See it here on "No Mandatory Helmets at Velo-city Global 2012 in Vancouver" on Facebook.
* I also recently had an exchange with FIAB (the Italian Cyclist's Federation) about this issue. They promoted hi-viz vests (tunics, really) starting early this year and I question the connection to the more recently implemented national law in Italy requiring the wearing of vests outside of urban areas and in tunnels (France and Hungary have a similar law. The European Commission has a guide to helmet and vest laws in member states, but some of the information regarding helmets is incorrect).
* In November the UK Guardian ran an article about bike lighting. The comments are full of dozens of guys shamelessly comparing the size of their lumens. 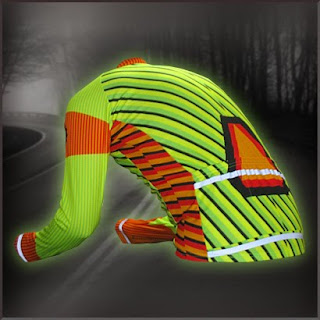 Thanks to Workcycles for showing me the light.

Related: Please "Like" "No Mandatory Bike Helmets at Velo-city Global 2012 in Vancouver" on Facebook!!
Posted by Slow Factory at 10:01 AM 17 comments: