SkirtGate & What happens at a Cycle Chic Bloggers' Conference? 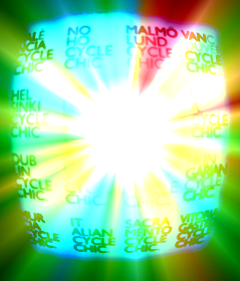 Last things first. This guy seemed to have written that it was invite-only, but that was probably just cheekiness and then I DID receive a Facebook invite from a Catalonian. I did not go and am wondering what happened. We should know soon enough through the regular channels but here are my guesses:

* Building on their Manifesto, deciding punishments for activities such as illegal use of the trademarked Cycle Chic name and typeface;
* Teaching newbie Cycle Chiclets and the male version, Chucklets, about why identifying as a "cyclist" is a no-no but proclaiming that one is a "citizen cyclist" should be encouraged;
* Deciding on the minimum-quality body suitable for pixelation;
* Establishing rules on only photographing women on bikes from behind.


I am sure the story of Jasmijn Rijcken - the short-skirted Dutch woman on a bike stopped by a cop in NYC - came up repeatedly.  As various people from this non-sub-culture proclaimed this

... called the cop "Taliban-esque", I would guess that they are planning a short-skirt flash mob Citizen Cyclist tour in villages in the mountains of Afghanistan and Pakistan. Or indeed in Saudi Arabia. I wish them luck with that.


In a follow-up to the Streetsblog entry mentioning Saudi Arabia, there is a discussion of this was a hoax or not -- some kind of viral marketing. In this entry Noah Kazis concludes that there is not, but others - sorry, no reference for it - think it is. Perhaps the truth lies somewhere in between: Rijcken was cycling innocently as pictured, did get harassed by some primitive, sexist police officer and then only later on did she and colleagues decide to make the most out of it.

There are plenty of difficult barriers for women to do any kind of cycling, and fashion - whether individual, or branded, globalized and trademarked - should not be another one. Cycle Chic (TM) and cycle chic are both great and fun, but my suggestion for the people involved in e.g. a related solidarity ride is to not just look in the mirror, but consider more good ways to use their wheeled, sartorial power to re-clothe the actual city streets in a fashion that directly addresses the needs of all women, or everyone.
Posted by Slow Factory at 5:08 PM No comments: