Does your street have special bike clothing?

This is the first of at least two parts about defining "streets".

Mikael Colville-Andersen from Cycle Chic travels to Dublin as part of events held by the Danish Cycling Embassy in the capital of Ireland. Looked like lots of chic-y fun. About the same times on it's sister blog, Mikael - the analyst-provacateur - comes down hard on "Vehicular Cycling" and gets lots of reactions (best to read that first before you continue here).

As always "infrastructure" is mentioned as something necessary for lots of cycling.

But was this always the case for Dublin... 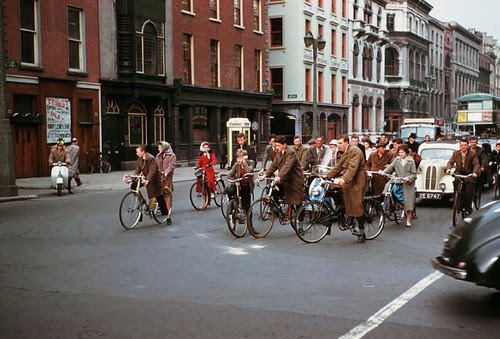 Vehicular cycling in Dublin, 1961. Photo courtesy www.copenhagenize.com (Mikael). A great photo he has used more than once to show how popular cycling used to be in Dublin and how it could be again.
Or in other cities? 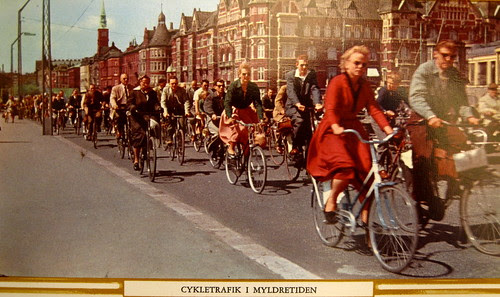 Vehicular cycling in Copenhagen, c. 1950s. Photo courtesy www.copenhagenize.com. Even if this is not literally Vehicular Cycling - if the cyclists have some XXXL bike lane - they so dominate the road that any cars would need separated facilities to protect them from the cyclists!

With all due respect, am I missing something here? Why does Mikael use two examples of what is - more or less - vehicular cycling - with a small "v" and a small "c" to show that separated infrastructure is needed?

I feel very safe cycling in Copenhagen and Amsterdam and so on. The authorities, designers, advocates and activists do a great job. I am not arguing for VC in these cities under current conditions (primarily too high speeds). Perhaps the whole frame for this discussion is a little off, so I want to suggest alternative definitions of the two ways bikes and cars are dealt with in cities:

Vehicular Cycling: In its pure sense, this follows a serious underestimation of the subjective and objective danger cyclists feel towards drivers.

Separated infrastructure: While definitely better in encouraging a higher modal share of cycling, it is the result of accepting that heavy, privately-used vehicles traveling at 50 km/h (30 mph) or higher are necessary, or inevitable, in built-up areas.

A few years back - if I remember correctly - many cyclists in Dublin protested the plans for separated infrastructure, and it seems like they lost.

So... is separated infrastructure special bike clothing? Are bike paths helmets? Mikael and many others in the "Cycle Chic" movement have fantastically shown that people can wear whatever they want - or as nice as they want - whilst cycling, but how come this logic does not carry over into how the streets themselves are adorned?

What kind of street do you live on? How is it clothed?
Posted by Slow Factory at 10:21 AM 3 comments: