Part Two of this Series. For Part One - which gives an overview and the context for the focus on training people of immigrant-background - click here.  For Part Three - about "Pure and Real" bike modal shares, click here. 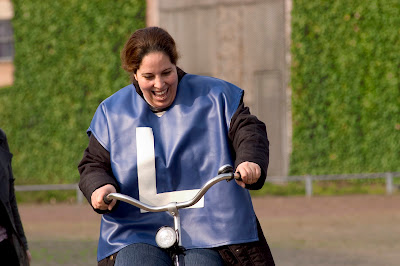 Cultural and societal empowerment via bike. "L" is for learner... and laughter: Meryem Mouncif, from Morocco, apparently enjoys a cycle-training course given by the Centrum Buitenlandse Vrouwen (Centre for Foreign Women) in Tilburg, the Netherlands.

“Unfortunately there are not really municipalities or politicians that want to 'go' for this topic. It has not been so in the past, and not now either,” says Angela van der Kloof, a sustainable mobility consultant working at Mobycon in the Netherlands.

The vast majority of training happens informally, like in many other places – well, where parents bother - typically where parents teach their kids. Children receive traffic theory classes in their schools starting from age 6, and many take an on-street test by age 10 or 11.

Angela continues: “Formal cycle training in NL has focused on women who were not born in the Netherlands. In the 1970s, women - mostly from the Mediterranean-area - were able to join their husbands who had emigrated for work. They had instruction in language, sewing, knitting and handicrafts, and then started to ask for cycling instruction. The formal training began in the 1980s, organised at first in a grassroots way by volunteers.” 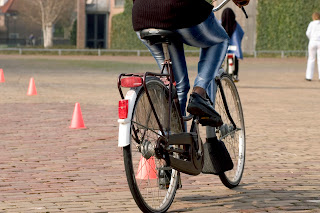 These days there is cycle training for children and also elders who have cycled their whole life and might need to be advised on things such as the advantage of lowering a seat, or – for men – using a low-step over bike, or a side mirror if they are unable to comfortably turn their head.

“After about 30 years of small scale or grass roots cycle training initiatives, hardly any municipality takes it seriously,”, says Angela. “Sometimes there is a sentence in a cycling policy document, but these years it has become more popular to either ignore specific needs of immigrants or other less powerful target groups, or ridicule them.”

She continues: “There are some exceptions. In my hometown of Tilburg [a city of just over 200,000 persons in the southern Dutch province of Noord Brabant] people who were not born in the Netherlands have been incorporated into the cycleplan as a specific target group. As a member of the Tilburg Fietsforum, which is an NGO that advises the municipality on cycling issues, I contributed to this cycleplan. 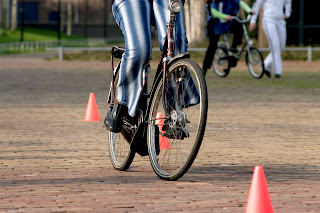 “So in Tilburg it has been pretty well arranged for quite a lot of years now. At the same time, last year the city council asked themselves how effective cycletraining and swimming lessons were for the integration and emancipation process of immigrant women. Another consultancy did a study and they found that the courses were very effective. So there was no basis to stop the subsidy. But each time, in every city, the people need to fight for it.

“What I mean is, that local politicians tend to look at the personal benefits for the participants of the courses only. And not look at the societal benefits in the short and long term: more health, less pollution, congestion. They just do not see why the municipality should bother and subsidize this or stimulate it otherwise.”

In 2008 and 2009 Angela was involved in supporting the setting up of a central cycle training point in Amsterdam. The project has since been stopped and the policymakers and politicians decided to focus on cycle training for children in general, not for specific target groups. 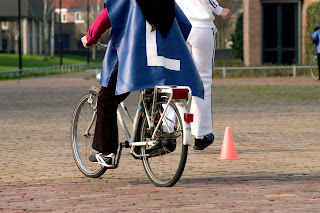 “The official version for the halt of the programme is that it is hard to reach women with educational programs and it is more easy to reach the children through the schools, said Angela, “The reality is that there are waiting lists for the adult cycle training (some men have also expressed their need for cycle training) and schools are overwhelmed with educational programs and topics. Practical cycle training is often not a priority at schools and it is not easy to organise. It is not a good idea to train children in schools and not train the parents. Cycle training only makes sense if you have the possibility to cycle outside the school and children need their parents or other experienced cyclists to guide them in traffic. It is impossible to organise and finance enough on-road training for children in schools. It is much more efficient, effective and empowering to train the parents to cycle and give them tools to train their children themselves. The basic rules in traffic are being taught at school and of course they should keep on doing this!”

So has the focus on non-Netherlands born people increased their levels of cycling compared to other transport means closer to the Dutch average?

“Well, on a national level we have some information on how much these groups are cycling,” concludes Angela, “but, in regards to a balancing of mode share, very, very little research has been done on the topic and I think all of it is qualitative.” 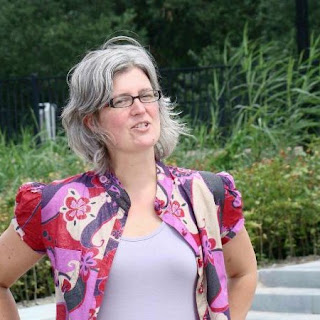 ***
In the coming days I will continue the series to further detail my arguments in Part One. For Part Three click here. Please join, follow or otherwise watch this space.... and have a safe and truly representative holiday!
Posted by Slow Factory at 10:31 PM

Email ThisBlogThis!Share to TwitterShare to FacebookShare to Pinterest
Labels: bicycle

How sad! I thought training for non-Netherlands born people was common there, and on-road cycle training for kids too.

I'm not sure I agree it's useless to train the kids without training the parents. I think kids like to cycle without adults, as a way of getting around.

Sometimes I wonder about other countries like Sweden (and Germany, etc) though. I recall a study done here saying X per cent of the population can't see themselves cycling, regardless of what accomodations are done. Cycling has an image problem and it's not just among those not born here.

Thank you for your comment. In a way cycle training for non-Netherlands born people is common in many municipalities. I was making my point that it is common because ordinary citizens find that everybody should have the opportunity to learn this. And not because our local governments pick this up.

In the same way it is normal for children to have on-road cycle training. In fact; many children have it every day as they cycle to school, clubs, for shopping, for anything. And their trainers are their parents, brothers, sisters, grandparents, .... And not specially trained cycle trainers, as there are in other countries.
Personally, I think this is a tradition that we Dutch people should cherish. But our society is not aware of this tradition. And also not of the fact that the number of children receiving less of this cycle training by family members is growing.

Surely children like cycling without the parents and it is an important step in their growth to adulthood to do so.
Cycling 'around the block' on your own is being done by children from 4 or 5 years onwards. The age that children cycle to school on their own is about 11 in the Netherlands now. This age was a bit lower in the 80s and 90s, but schools are bigger now, so children live further away. Also, parents are less keen to let them go on their own. As they fear accidents or social unsafety.
Before this 11 year old can do this, he/she needs to know how to behave in traffic. And this is something that they learn in this process of daily cycling to school etc. with an experienced parent (or other family member). This important part of the informal training is often not seen as training, but taken for granted.

It intrigues me to see that over here cycling is super normal, which is good in many ways. But at the same time leads to the fact that many things are taken for granted. Like parents training their children.