Part Three of this Series. Please first read Part One - originally published in slightly different form in Cycling Mobility issue no. 4 - which gives an overview and the context for the focus for this entry - click here. For Part Two, focused on cycle training of immigrants to the Netherlands, click here. For Part Four, about how UITP and the ECF are aiming to improve modal share, click here. 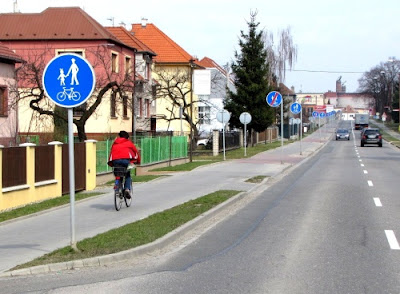 Don't take it out on pedestrians, or blame the cyclists who have to use it. A street in the Moravian town of Uherské Hradiště personifies the "Hey, Get Outta My Way!" Malus. Photo: www.cyklostrategie.cz

Since bike mode share percentages do not tell the whole story about who, how and where people are cycling, I propose the concept of:

1 - All citizens – between the ages of 8 and 80 (inclusive), without regards to gender, gender-preference, national, religious, political, cultural or ethnic self-identification, able to use some form of a human-powered (motor-assist) wheeled vehicle generally understood to be a bicycle or variant thereof, and within the municipal boundaries – cycle at exactly the same rate...so a 50% rate of cycling as a primary means of travel is exactly that and impurities are subject to the Who is Not Cycling Malus, and;

2 – All cycling is done within the law and according to custom agreed by 2/3 of municipal subjects and transgressions are subject to the Anti-Solidarity Malus, and;

3 – All cycling is done on infrastructure which was not previously used by pedestrians or not unreasonably taken from exclusive pedestrian use and violations are subject to the "Hey, Get Outta My Way" Malus.


Here is how it works:
+ Measure bike share in the simplest way, i.e. only gross counting, e.g. with bike counters in major cycling corridors. The result is the base bike modal share.
+ As much as possible, record who is cycling (see 1, above), how they are cycling (2) and where they are cycling (3).
- Subtract the second from the first, separately for each three catergories. The results are the bike modal share subtotals.
/ Average the combination of all three. The result is the

Real bike modal share in its worse form should – to be fair – never be worse than half the official rate.

Here is an example methodology for point no. 2:

“Anti-solidarity malus points” (“Douchebag demerits” in American English/for the US environment) are recorded for illegal activities/behaviour going against custom and awarded to the mayor or city council, whichever is more appropriate, and it is with these awards that they must adjust e.g. results of primitive modal share rates recorded nearly blind e.g. only at the district or citywide level.

This anti-solidarity malus can be recorded roughly, for example by counting cyclists at any time of day and then subtracting one from the total based on any observed violation of law and custom. It can also be recorded more precisely, but noting the specific violations – some – e.g. riding without lights at night and scaring pedestrians will receive more malus points than others, e.g. riding on the pavement (sidewalk) on the way from the street to a front door or bike parking for a distance longer than provided by the closest open street-pavement transition point.

Citing or fining these cyclists is the job of law enforcement and is separate from malus counting. The point of the malus counting is to punish the local government and to keep them honest.

In the coming days I will continue the series to further detail my arguments in Part One. Please join, follow or otherwise watch this space.... and have a safe and truly representative holiday!

Intriguing, but a little impenetrable. Personally, I would have less trouble finding my into your thinking if you gave a conversational precis.

Behooving, what can I say that might light your way into my mind?

Behooving, I tried to clarify things. Tell me what you think.