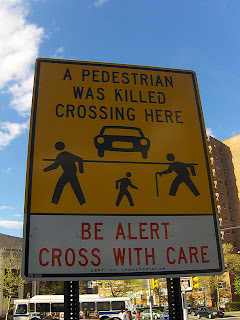 Foreword: I lived in NYC from late 1996 until early 2000.
Since Occupy Wall Street began, I was curious to see if any organizations, publications or blogs etc in NYC or abroad focused on sustainable mobility and better streets, or at least the major ones, would show support or even comment on, amongst other things, the actions of New York City mayor Michael Bloomberg. The lack of mobility choices of many of the 99% is clearly connected with the policies of the 1%, and, after all, what good is a public space if you get attacked by the state for being in it?

Time's Up! in NYC did respond, as did J. H. Crawford of Carfree.com (the latter with a video "Occupy All Streets!" linked below). But as far as I can tell no other groups etc. did (tell me if I missed something).

What is keeping these organizations quiet? I knew that - just to name one example - in 2009 the Bloomberg Foundation donated 125 million dollars to a coalition including EMBARQ, and that within a year EMBARQ praised Bloomberg policy in a video without mentioning this funding (and in the meantime a deputy mayor of Bloomberg had been appointed to simultaneously head his charity (!).... and that, generally speaking, sustainable mobility professionals working in NGOs find it personally prudent to separate a friendly issue from a sticky one. At least a couple people told me privately to do this in my related blog comments, Tweeting and so on.

BUT I don't roll like that. For me it's about solidarity and sustainability. And I don't want to single out Bloomberg: As I write this the Portland police are evicting Occupy Portland - wonder how this affects the street cred - or whatever - of the mayor of that city famous for cycling (in the USA context.)

Recently in my gentrifying neighbourhood in Berlin, I complained to a friend and neighbour  - he is about 50 and has been active in local politics at a grassroots level and has lived in the same co-op since the 1980's - about all the anti-social cycling that happens in the somewhat traffic-calmed neighbourhood. He passively encourages it, and does not mind if the restored cobblestone pavements (sidewalks) are covered with trash.

He said "We made this neighbourhood so nice that we can't afford to stay in it."

Gritting and gnashing my teeth as I leave aside gentrification (!), the "stop & frisk" policy of the New York City Police Department, lack of city support for animal shelters, support of the abusive carriage horse industry, and, connected with Occupy Wall Street, the destruction of a library in public space,  arrest and harassment of journalists and pepper spraying of peaceful protesters -- all of which NYC Mayor Michael Bloomberg is ultimately responsible for, I, like many, appreciate what the NYC Department of Transportation (NYCDOT) has recently done for surface transportation safety in NYC, as part of the goals of PlanNYC, created by the Bloomberg administration. 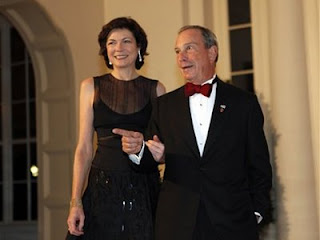 Mike Bloomberg and his partner Diana Taylor, out for the evening, dressed in black. Photo from Business Insider.

Separated bike paths, bike parking, bike share (depending on its yet un-named sponsor) ... good stuff. Bloomberg's "lieutenant" in charge of this, the NYC Transportation Commissioner Janette Sadik-Khan, is popular for good reason. Her personal style is well known, too. She dresses in black, like the night, when riding a bike. 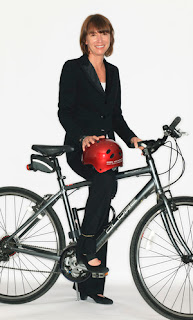 Curious if Sadik-Khan wants a bike with a proper, full chaincase so she doesn't have to keep on begging people for extra rubber bands. Photo by Fred R. Conrad/NY Times. 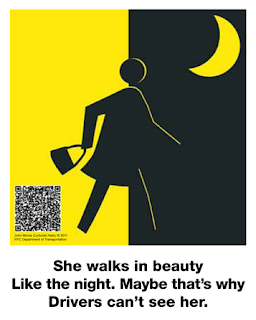 One of the signs - also a woman in black! The signs are small. Very small, so that they won't distract drivers, says Sadik-Khan in the NY Daily News (but then how does the "shared responsibility" of motorists get "attention"?).

Indeed, why is the campaign focused on blaming the victims? It might be because the budget - sourced from drunk-driving fines - was so small that larger driver-focused signs were impossible budget-wise. It could be because this was not very long in planning, and the connection was simply a 2010 New Yorker mention of the artist John Morse's earlier haiku work in Atlanta.

Why is the campaign biased towards owners of smart phones which can read the QR codes? Half of the images will be presented with a QR code only, but perhaps only 1/3 of people walking and cycling in NYC have smart phones.

And now a few more of the signs: 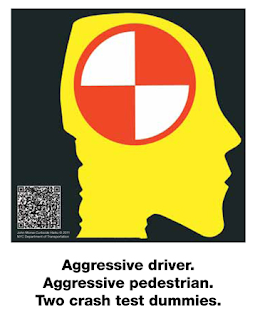 It is not clear if the intention is driver vs. pedestrian here, but if it is, comparing the aggression of a driver and a pedestrian is an absurd non-starter. An aggressive pedestrian might push and shove on the sidewalk, but what can they do (compared) to a driver, let alone a car? An "aggressive pedestrian" is most likely to be injured themselves, or possibly make a cyclist fall, but no chance of doing the same kind of damage as a driver.

The blame the victim thing seems to be artist Morse's thing. In the anti-Sadik-Khan New York Post he says "... think about the fragility of your body. You're just a human. You're nothing against these cars. Poetry underscores the harshness of this reality. That's why it has this power." 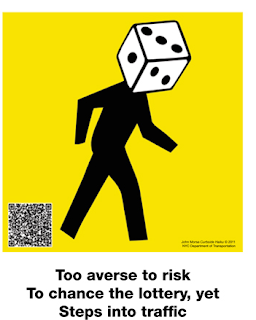 This is strange because the NYCDOT seems to recognize this. It is why separated bike paths - the best insurance against cyclist injury and death in a city (and world) where most people are still not prepared to stay or be carfree - are being built in NYC. This makes me think that NYCDOT is confused about how it wants to handle this "power". 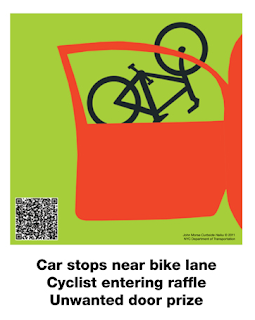 Well, Ms. Sadik-Khan, if the bike lane is this dangerous why is it not a separated bike path?

You may have noticed the partners of NYCDOT in "Streetside Haiku". The Safe Streets Fund includes both the Toyota Foundation and the American Automobile Association of NY. While these groups have every right to be involved with driver behaviour, I am not surprised that they support this partial pedestrian and cyclist victim-blaming action. They also support the NYCDOT's free helmet programme, which uses statistics on helmet safety - e.g. "Wearing a [...] helmet reduces the risk of serious head injuries by 80%..." which I believe are quite exaggerated, and then tosses out hyperbole like "...helmets are a good idea for cyclists of all ages..." while - I am sure - never telling parents something like what is in the proposed label at the bottom of this advert.

Confusion within NYCDOT communications, while possibly chronic, is perhaps nothing compared to how its gains in subjective (real) and objective safety are at least partly offset by the dangerously passive behaviour in regards to safety by the NYPD. 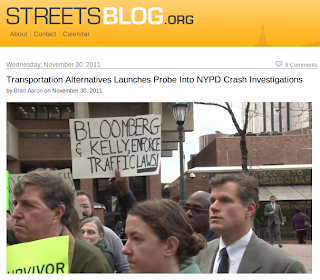 The situation is now being investigated by Transportation Alternatives (TA). On Tuesday it "... delivered over 2,500 citizen letters to NYPD Commissioner Ray Kelly demanding that the NYPD crack down on dangerous driving, and announced a comprehensive probe into how the department handles traffic crash investigations." The press conference video is here.


Stop & frisk is also, obviously, anti-freedom, so it works against the freedom increased by public squares and bicycle infrastructure. 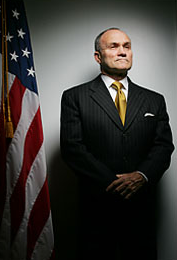 Another Bloomberg "lieutenant", Ray Kelly, in black! He is also quite popular. Some say he is a kind of general to Bloomberg's commander-in-chief.  Photo from Brooding Cynyx.

The NY Daily News story mentioned above reported that TA responded to the NYCDOT haiku action with:

Safe street designs. check,
But where is the enforcement?
It's your turn, police.


In the same vein, coverage in The New York Times "City Room" blog, comments were - by request - in the form of haiku. The most popular, by Steve in Brooklyn:

As you can see above Bloomberg (and his partner) plus his two commissioners most directly responsible for safety of NYC's surface transportation wear black often and very likely at night. They - like anyone - should feel free to do so. NYC - and all - drivers following reasonable speed limits should be able to see them. If they cannot see them, it is because they are driving too fast (and that the street might have too fast a speed limit or other designs which prioritize motorized traffic flow over everything else).

To be fair to the artist Mr. Morse (and NYCDOT), they did do one image and haiku I really like. 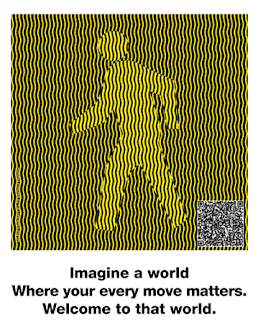