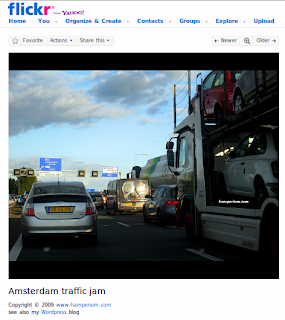 Traffic congestion in the Dutch capital, including a Prius and a bunch of brand new cars. From The Hamperium.
A video from Mark Wagenbuur in the latest post at Copenhagenize is an extremely dangerous (way to talk about) history. Please watch it before proceeding.

First of all, in response to Mikael Colville-Andersen's brief comment, a comparison of the situation which "vehicular cyclists" deal with (and perhaps enable to some extent) with that in the Netherlands leaves out at least one alternative...

I love what Mark Wagenbuur does. Many videos on his You Tube Channel are also on the excellent A View From the Cycle Path (this a direct link to a post with another great Wagenbuur video), often accompanied by interesting comments.

The not-recent history of surface transport in the Netherlands is mostly new to me (and I appreciate this very much). The problem in the story starts with railways, which - relatively-speaking - introduce a kind of precursor to or early-stage hypermobility to the country. Trains, like trams, increased the distances between destinations, making speed necessary to compete, and thus addictive. But until various decades in the first half of the 20th century this still kept cycling popular and/or dominant.

The fatal error came - as the video shows, but with a different take on it - when cities introduced a design style from the countryside. It seems that this was not seen as a fatal error by enough people at the time: Either there were three options in the cities (i.e. keep streets the way they are OR separation for cyclists OR keep the motorized vehicles out) or just the first two. The video does not make clear exactly who made the decision. Were people predicting the situation about 50 years later in the 1960's (my understanding is that this was the nadir of cycling in the NL as well as in Denmark)? If so, were their voices ignored? If there were not many voices - and so not three choices - it is fair to say that this was bad and wrong, but we must also appreciate everything which has been done to fight back (very much including the new design elements in the video which I provide the link to in the Hembrow blog).

So, these days, when at its best cycling modal share is about 50% (as it is Groningen in the north of NL) and innermost parts of Amsterdam, Copenhagen etc.) is the glass half-full or half-empty? This beverage also contains collective public transport (nearly and chronically ignored in some cycle-cheerleading), but what if the non-PT and walking split is half private automobiles and half bicycles? Should we be half-happy or half-sad? (re: cheerleading, notice how that story does not mention collective PT?) It depends on who is writing or showing the history, yes? Indeed, could the private automobile lobby show a video on their You Tube channel, boasting about how they have managed to hold on to a huge modal share despite all the traffic jams, parking costs, "green" and health issues?

Cycling in the Netherlands is great - safer, etc. than here in Germany, where the separation model has been used often at the expensive of pedestrians - but I don't think it is accurate to say that the bicycle has "won" there (as someone told me recently). It is more truthful - and more objective - to say that the car has had a (very) conditional surrender (I am reminded also of something my father told me: During WWII - my Slovak father was a tween/teen at the time - the German radio referred to everything post-Stalingrad as a "strategic withdrawal").
Still, there is news which we can agree is good and which deserves strong praise: The bikes move faster than motor vehicles much of the time on separated paths in cities when the motorised lanes are congested, so actually these paths can more positively be called "mobility express lanes" (not just "bicycle highways")! But at the same time there are still a very high number of people trapped in their cars, and they are not the only ones who are suffering. Noise and gas/particle emissions still exceed allowed limits in parts of the Netherlands (and Denmark, and of course in many other European countries), and this hurts everyone.

Looking back over 100 years it is perhaps easy to condemn a decision, or how it was made, or indeed if anyone cared, but allowing (especially private) motor vehicles (which kill on contact at only half of their design speed) inside cities was a mistake, and is proving a very, very difficult one to correct.
Posted by Slow Factory at 4:18 AM

"But at the same time there are still a very high number of people trapped in their cars, and they are not the only ones who are suffering."

Suffering? Sitting in a mobile parlor with heating and ventilation, entertainment, comfortable seating, etc. is "suffering"?

At what point does lack of creature comforts become human suffering?

Impatience with stopped traffic causes anxiety among some people.
Can that really be called suffering? If so, people need to toughen up and get over themselves.

Thanks, Tard: Obesity, social exclusion in public spaces due to velocity, all the gas and particle pollution from one's own car. I would call it suffering unless one is already suffering heavy denial.

You might be overlooking some of the trickier issues in the video, for instance: The already "poorly constructed and maintained" dutch roads were narrowed even more in the 1850s "to cut in maintenance", leaving a space for the later construction of bike paths? seriously? how wonderfully convenient, isn't it?

I have not been able to track proper data on the amazing narrowing dutch roads, and I have a guess as to why: because it didn't happen. I cannot recall any single instance of roads "being narrowed" or even neglected in any significant amount since the fall of the Roman Empire (although events like the Black Death or the Irish Great Famine might be worth a look). Such a phenomenon could only have happened if the Netherlands had suffered a demographic or economic debacle of epic dimensions... any idea what such a debacle might have been?

So the the amazing-and-wonderfully-convenient massive road-narrowing is, in plain words, a complete fabrication... oddly, it is a fabrication that is not in fact necessary to explain the origins of Dutch cycle segregation, so why include it in the video at all? Because the video is not about "explaining" anything: the video is about creating a fanciful account of mythological intent, aimed at justifying and embellishing the present Dutch segregation policies (and politics) rooting them in some kind of pre-industrial eden.

There are other amusing parts in the video, all of them congruent with the mythological fabrication hypothesis. I can understand your expressed love for Mark Wagenbuur's videos: They are in fact lovely like watercolors... and just as thin.

@Bicilibre: Thanks, could you please identify yourself? I am also going to see if Mark Wagenbuur wants to reply...

Bicilibre forgets one core value in Dutch traffic outside town prior to 1900: water. Holland itself, i.e. the provinces along the coast, had a dense network of canals, simply because the country was in fact one big bog (it still is). All major transport went by ship; look up "trekschuit" on Google. Roads on the higher grounds in the Eastern part of the country always were very poor, so from about 1800 on a number of new canals were dug which took the role of modern highways. As a result the existing roads were even less used, so it is quite possible that they were narrowed to cut costs; Mark W. must have done his research there. Also don't forget that people had very high hopes from railways from around 1850 which were expected to make all slow horse-drawn carriages and carts superfluous. And from my own experience I can tell you that until the 1950s most cargo traffic in the Holland provinces still went by ship.

Are you seriously implying that in a country in which the bulk of travel and transport was made on water to begin with the digging of a few more new canals had a significant impact in the use of the scant number of existing roads, to the extent of making new spaces available for the germinal segregated cycle network? Am I even supposed to argument seriously against this?

And "Mark W. must have done his research there"? Well, he has had a few months already so show his research, but apparently he has chosen not to bother.

@Bici, I would have asked Mark to comment here IF you had identified yourself :-)

"Such a phenomenon could only have happened if the Netherlands had suffered a demographic or economic debacle of epic dimensions..."

They lost the first world war (not WWI; the first war fought on a global scale) which had made them wealthy in the first place. The roads were made by their conquerer. The conquerer then themselves suffered setbacks in the war and began a "strategic withdrawl" and the Dutch regained independence in only 1830.

The economic debacle was of sufficient proportion that the Netherlands went begging other countries to purchase many of its remaining colonial holdings, as they now represented a drain on the national economy; precious capital needed to rebuild themselves as a viable independent nation.

Mark is trying to tell the history of cycle paths, not world history which he might reasonably assume that people have some general knowledge of (I live in a former Dutch colony absorbed by Britain during the war). He begins with Napoleon. If you know who Napoleon is the history as presented by Mark makes perfect sense.

Oh, come on. Are you serious? I am sufficiently identified here for any practical purposes. If Mr Wagenbuur makes such preposterous claims as he does and you publish them, neither he or you have a right to demand anybody's name when asked to justify them, anymore than any scientist (and I hope Mr Wagenbuur doesn't hold himself above scientist status) needs to know who the peer reviewers of his work are to put up with what they say.

Mr Wagenbuur says X? Fine. Is it too much to ask him to prove it? Or do I need to come here with my ID card between my teeth to earn the right to do so?

Nothing, absolutely NOTHING in all that gives an ounce of proof about the existence of those amazing narrowing dutch roads. Can we please get serious for just one minute? Please.

Bici, would you be happy if, for example, in Seville the pedestrian space was never infringed upon and separated cycle paths were created only out of motor vehicle lanes?

If these were the physical conditions but most new cyclists were former pedestrians what does it mean? That they were poisoned by the bicycle?

How about if car-driving became much more expensive and parking simply impossible in many cases? Do you think that would get drivers on bikes?

I do not think that a culture can change so quickly, but infrastructure is another issue.

"Natural streets"? What makes one street natural and another not?