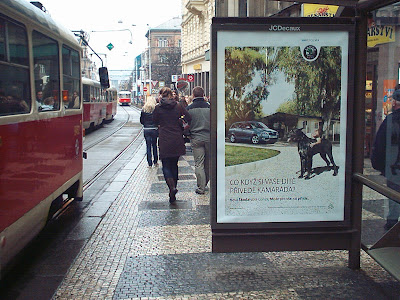 Prague is a marvellous place to be cynical!

I agree completly. There needs to be standards for advertising on Public Transport. Its an insult to people who take the tram-bus etc out of choice for the myriad reasons not to have a car. Shall we do some campaign about this?

To be honest, I don't really got where you are heading to with the post. Skoda is owned by Volkswagen, and it tries to aim at families. This is what we all know. But I don't get the rest...

Prague Transport (Dopravní podník, Prahy) is also aiming at families, so why does it allow companies with which it competes unfairly (to the advantage of the car company) to advertise pretty much directly to its customers? Aside from the environmental issues, it is just bad business. Won't else don't you get?